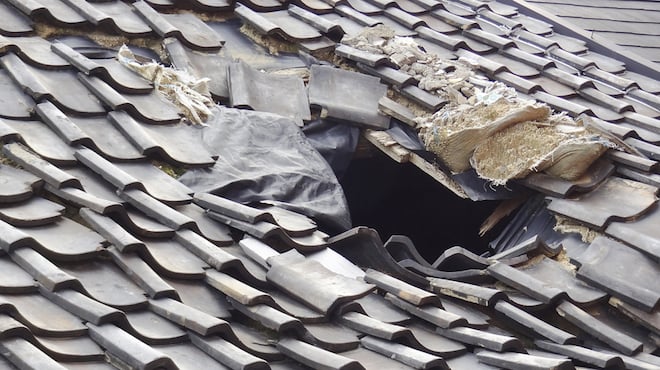 Severe storms and how they can impact your roof

We all know that a particularly severe storm can cause a lot of damage to homes, business properties, vehicles, and roads and other infrastructure.

When it comes to the worst of the worst, storms possessing extremely high winds (those typically defined as cyclonic) can even rip roofs off of homes and commercial properties. We've already covered what you can do in preparation for severe storms, so for today's article we're focusing on what to consider once a severe storm has passed.

How likely is it to lose a roof during a storm?

When big storms hit, particularly those with substantial winds, there is the likelihood that a roof can be ripped off from the sheer force of the winds themselves. However, the likelihood of this happening to your roof (or anyone else's) is relatively slim. The chances of having your entire roof blown off during a storm depends more on how good of a condition it's in the first place. If any part of your roof is already damaged or weakened from prior events or general ageing, then your roof will naturally be more susceptible to the possibility of blowing off when a storm hits. So addressing the issue of any current weakened points or damage to your roof as soon as possible is of critical importance.

The loss of tiles

While completely uprooted roofs aren't as plentiful after huge storms as some may think, parts of your roof can still be lost. If you have a tiled roof, such loss is more likely, especially if any tiles have already sustained prior damage or weren't properly installed. The good news is that if you do lose a couple of tiles after a big storm, you want need to have your entire roof replaced - just those few tiles that were lost. Just make sure to have them replaced ASAP.

In the event that your roof sustains large amounts of damage or is completely lost in a storm, it's important to organise some temporary roofing as soon as you can. Emergency volunteer groups such as the SES may be able to help by covering the exposed areas of your roof with tarpaulins. While this will help keep the outside elements out, it's not impenetrable. It will help you get by, but organising repairs and/or replacement should be done as soon as you are aware of what damage has been sustained.

Keep in mind, however, that many roofers and other qualified contractors are in massive demand after a severe storm, so it may take a couple of days before they can assess your roof and the associated costs for repairs/replacement. And don't forget that if you have insurance, a portion or the entirety of your roof repair/replacement costs may be eligible to be covered by your insurer.

Depending on the amount of damage your roof has sustained and/or the type of climate you live in, you may need to temporarily move out of your home for the sake of your health. In cooler climates, for example, any notable level of damage to your roof could cause your home to lose much of its structural insulation and become far too cold to live in without possible health issues. If your home does become unlivable in the wake of severe roof damage or loss, then you'll need to temporarily move out while repairs or a replacement are underway.

Find out how long you'll need to be away for and assess what would be the most financially viable option for you (e.g. could you afford to stay at a hotel for a few days or would it be best to stay with friends/family?). Depending on your insurance company, some may cover the costs of alternative living arrangements (hotel/motel) as part of their policy. Such information should be contained in your policy's product disclosure statement or you could contact your insurer and ask them to confirm whether or not this is provided.